Official websites use .gov
A .gov website belongs to an official government organization in the United States.

Staying Curious, Part 1: A Lifetime of Activism and Education on LGBTQ+ Rights

Back to the news 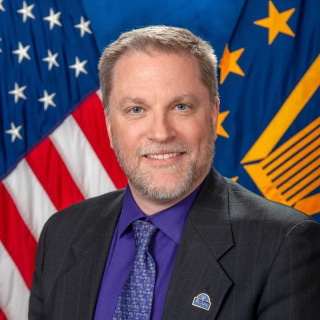 In the first of a two-part series of OIT Icon interviews, Dewaine Beard, Executive Director for End User Operations in the Department of Veterans Affairs’ (VA) Office of Information and Technology (OIT), shares his experience as a member of the LGBTQ+ community, from his days as a “campus radical” to his time as a leader in Development, Security, and Operations.

Mr. Beard’s End User Operations workforce is responsible for fixing, deploying, and securing end user equipment for VA employees across the nation and its territories, ensuring our Veterans, their families, and their caregivers can access medical, benefits, and memorial services. Mr. Beard has been with the Department since September of 1995.

Is there anything you’d like to tell us about your background before we get started?

I came out when I was 17 in 1985. I was the first openly gay member of student government at my undergraduate university in southeastern Ohio, and I was recognized as a “campus radical” in a book about student activism in the 1980s for my support of gay and lesbian rights. Back then, I helped pass the first human rights ordinance in my university town, Athens, Ohio, I ran the Gay and Lesbian Support Group, and was president of the Gay and Lesbian Student Organization. It was a busy time! Later on, I became an AIDS, and District public health educator for the Cook County Department of Public Health before I joined VA. So I had quite a background in public speaking, activism and gay and lesbian civil rights prior to joining VA.

As you look over your lifetime of activism for the LGBTQ+ community and you look at Pride Month, what does Pride Month mean to you today? Has that evolved over time?

It certainly has. When I attended my first Gay Pride march in June of 1985, it was in Columbus, Ohio, and it was an amazing experience for a kid who grew up on a farm in the middle of nowhere and didn’t know that there were other gay people. To suddenly be marching with thousands of folks down High Street in Columbus, Ohio, to the state capitol building to demand rights for gay and lesbian people was transformative. And along our way, counter protesters waved signs about homosexuals going to hell while others lined both sides of the bridge to pray over us as we went. It felt political, powerful, and dangerous. Over time, my experience of Pride shifted from an act of power to more of a celebration of equity and community spirit. As LGBTQ+ people achieved more civil rights and more visibility in the United States. When the cultural perspectives around homosexuality shifted, somber political speeches gave way to a festival atmosphere. When I moved to Chicago, Pride was a celebration with floats in the gay neighborhood with lots of balloons and partying — it was very different from the politically focused charge for gay rights that it was in the in the mid-80s. Now it’s really a celebration of family and community and belonging and guarding the borders of civil rights so that we can maintain our position and our ability to get married, raise families and keep our jobs. To this day, it is still completely within the rights of any public accommodation, hotel, or business, to throw gay people out. If I were to go to a hotel or a restaurant with my husband, I could certainly be discriminated against and there would be no legal recourse for me. There is still a long way to go to get equal rights and equal protections for gay and lesbian folks in the United States. The battle’s not yet won.

Has there been a time — and there may have been many — that you can think of where you felt and seen as being part of the LGBTQ+ community? And how did you handle that? And what did or didn’t that teach you, or what lesson did you learn from that experience?

I think many folks in today’s generation forget how recently it was that we didn’t have rights. Survival often meant we had to stay hidden. Just to set the stage: in 1947, President Truman signed an executive order known as the Loyalty Order, which allowed for the persecution of LGBTQ+ folks in government. In 1953, Dwight Eisenhower signed another executive order, which further strengthened the tools that the FBI, under J. Edgar Hoover, could use to persecute and purge gay and lesbian folks from the government. Those executive orders were in effect, and LGBTQ+ folks could be discriminated against and fired with impunity from the Federal Government until Bill Clinton signed the executive order to rescind them in 1995, the year I started at VA. This is not ancient history. Those of us who came into VA in my lifetime, in my career, faced absolute fear that if we were open about our sexual orientation, we would lose our jobs. The same is true for those in the military. Discrimination against LGBTQ+ service members came in World War One, were further strengthened in World War Two, and only began to change again with Bill Clinton, who ran on a platform of allowing gays to serve in the military in what became known as the Don’t Ask, Don’t Tell era.

Service members were allowed to serve as long as they were not open and no one knew they were gay or lesbian. As long as you didn’t tell, you were okay. During the Don’t Ask, Don’t Tell era, if anyone saw you doing anything that was remotely gay or lesbian, they could still lawfully kick you out of the military. And many military service members lost their jobs during that time. It’s only been very recently that our military folks were able to serve openly and some of those authorizations to serve openly have recently been threatened, especially for our transgendered brothers and sisters. In terms of feeling unseen in the community, “passing” as straight has meant safety. Being invisible can be a preferred way of operating for many of our LGBTQ+ folks in VA and in the military. Being open and honest and forthright about who we are as complete people has been the larger struggle. In fact, being publicly out as an LGBTQ+ person has been one of the pillars of the gay liberation movement since it began in the 1950s as a response to the persecution of gays in government.

As I came out as a gay activist in 1985, it was all about being brave enough to say, “Hey, I’m here and I’m gay.” I went to freshman male and female dorms as a member of the Gay and Lesbian Student Organization and I would say, “Hi, my name is Dewaine Beard. I’m gay. Ask me questions.” Just because people didn’t know gay people, they didn’t know what we looked like or who we were. There was a lot of misinformation and confusion about us. Simply being visible was a political act. In recognition of how important visibility is to securing our liberation, in 1988, National Coming Out Day was created. It’s celebrated on October 11th, which is the anniversary of the 1987 National March on Washington for Lesbian and Gay Rights, which I attended.

I can talk about a time when being visible was actually quite frightening for me. I was touring the display of the AIDS quilt at the Armory Arts Center in West Palm Beach, Florida with my boyfriend at the time. I was serving at the West Palm Beach VA Medical Center, and because I was in this photo in the newspaper, one of the doctors at the medical center went to leadership and asked that I be fired from my job. That didn’t go anywhere — my allies within the organization let me know, though, that it had been seriously on the table. Â That’s the sort of thing being visible can mean for LGBTQ+ folks at VA. Which is why I think it’s important that I speak up during Pride Month. I’ve encountered several gay and lesbian staff members over the last several years who were just as terrified about losing their job today as I was back then.

When staff see me and they don’t know that I’m gay, but they suspect because I was a 50 year old man without a wedding ring (until I got married last year) they would let slip that they had a husband or a girlfriend or something. And the terror on their face was terrible to see. And I would just say, “Well, my partner,” or “my husband,” to put them at ease. And then they would tell me about the worries. VA has a very military culture. They were worried that they wouldn’t get a promotion, be invited to meetings, or that their career would suffer. Some are still terribly, terribly worried. It’s very important for me as a senior leader, to show that you can serve and you can serve openly as a gay and lesbian member of the staff and have a beautiful, fantastic, fulfilling career.

Our commitment to digital and IT transformation is shaped by daily dedication to customer service and the close collaboration of our workforce, managers, and leaders. Ready to join us in improving Veterans’ care? Check out all current information and technology career opportunities on DigitalVA. You can also contact VA’s Office of the Chief Human Capital Officer at 512-326-6600, Monday thru Friday, 7 a.m. to 5 p.m. CST or by submitting a resume to VACareers@va.gov.

An official website of the U.S. Department of Veterans Affairs

If you are a Veteran in crisis or concerned about one, connect with our caring, qualified responders for confidential help. Many of them are Veterans themselves.

Get more resources at VeteransCrisisLine.net.